In Western Culture dessert is a course that typically comes at the end of a meal, usually consisting of something sweet. 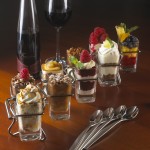 The word dessert is most commonly used for this course in Australia, Canada, U.S., and Ireland, while sweet, pudding or afters may be alternative terms used in the UK and some other Commonwealth countries, including India. In England, the term pudding might be used among the Upper and Upper-middle classes, with dessert only used if the course consists of fruit.