The Reverends Jesse Jackson and Al Sharpton, while visiting a grade school class, found themselves in the middle of a discussion related to words and their meaning.

The teacher asked both men if they would like to lead the discussion of the word “tragedy.” Reverend Jackson asks the class for an example of a “tragedy.” One little boy stood up and offered, “If my best friend who lives on a farm is playing in the field and a runaway tractor comes along and, runs over him and kills him dead, that would be a tragedy.”

“No,” says the Rev. Jesse Jackson, “That would be an accident.”

A little girl raised her hand and said, “If a bus carrying 50 children drove over a cliff, killing everyone inside, that would be a tragedy.”

“I’m afraid not,” explains Rev. Al. “That’s what we would call a great loss.” The room goes silent. No other children volunteer. Reverend Al searches the room. “Isn’t there someone here who can give me an example of a tragedy?’

Finally at the back of the room little Johnny raises his hand. In a stern voice he says, “If a plane carrying the Reverends Jackson and Sharpton were struck by a missile and blown all to smithereens, that would be a tragedy.”

“Fantastic!” exclaims Jackson and Sharpton. “That’s exactly right, and can you tell us why that would be a tragedy?”

“Well,” says little Johnny, “Because it sure as hell wouldn’t be a great loss, and it probably wouldn’t be an accident either.”

Booze and Sex Go Together 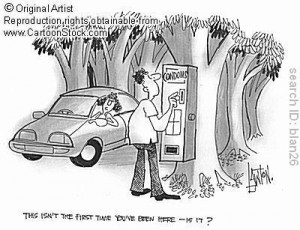 only in places where alcoholic beverages are sold for consumption on the premises… so bars, restaurants, 7-11 parking lots…

Who had the time to figure that out and why?