Vancouver! One of Canada’s premier cities, filled with culture, beauty and fun! And apparently, nightlife!

According to popular opinion, Vancouver ranks third, after Toronto and Montreal, in the top Canadian cities for the club scene.

Now, I know for some people around the world, the phrase “Canadian Club Scene” seems almost an oxymoron.

Yet, contrary to the sometimes

frozen hick image the world has, Canadians know how to have a great time, and enjoy some of the most amazing nightlife outside of Las Vegas and Miami!

Sporting a culturally diverse entertainment district, Vancouver is home to such places as The Tonic Club, 3 levels where you can dance to Latin and hip hop, balcony-like venues, and a 17 foot long bar, Bar None , known as a celebrity hot spot that requires being on the guest list to get in, and Celebrities Nightclub, known as the hottest gay dance club going.

Voted as the top Vancouver night spot, and fifth in all of Canada, is Republic.

A two-level London style bar  in the Granville Entertainment District, Republic’s main floor is live music and DJs, a dance floor and a bar that runs almost the full length of the room.

The club’s second level has a comfortable lounge, and a glass enclosed patio overlooking Vancouver.

AFTERglow Lounge at Glowbal has been personally recommended for a quieter venue, as has Cloud Nine Revolving Restaurant and Lounge for a unique experience in dining and entertainment.

And apparently the Keg Rooftop in Yaletown boasts a fun scene, and I hear they even give you blankets if you are chilly!

Unfortunately, it seems that one of the famous spots that I was interested in seeing, Delilah’s, is under-going refurbishment, and will be closed for this trip.

Delilah’s has been the premier martini lounge in Vancouver for decades, and comes recommended by our Drink Guy himself, Glenn…I guess we’ll have to save them for the next trip!

So, to all our fantastic Drink Guy fans, if you have any recommendations for Vancouver nightlife, I’d love to hear them! 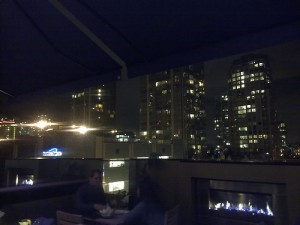