Earth Day 2010 is almost upon us and The Drink Guy is there!

This is the 40th anniversary of the first celebration, held in the USA in 1970. The objective of that first Earth Day event was to “raise public awareness of environmental problems and their potential solutions.”

Interestingly enough, the idea for how to promote a day focusing on environmental concerns came from anti-Vietnam demonstrations!

At the time, these demonstrations were happening all over the US, and the attention they were gathering was exactly what U.S. Senator Gaylord Nelson, the originator of Earth Day, was looking for.

Apparently (as I discovered during researching this post!) there is still much debate about the environment, and even  Earth Day.

From the fact that the first celebration fell on  the 100th birthday of Vladimir Lenin to the belief that it promotes a pessimistic, political ideology that portrayed humans in a negative light, there are many interesting discussions about all of this.

However, since this is not an episode of TDG TV, this is not about a debate, but rather a bit of fun and a bit of information and some drink recipes of course! 🙂

For example, did you know that April 22 is also the birthday of actor Eddie Albert (of Green Acres fame), an environmentalist and spokesperson for The National Arbor Day Foundation, and he spoke at the first Earth Day ceremony in 1970! Green Acres is the place to be!

In honor of Earth Day 2010, check out some of the cool “green” breweries and vintners online, or look around at your local businesses for some new experiences!

Or, check out local Earth Day 2010 celebrations for some excitement. In Toronto, The CN Tower is going green ! 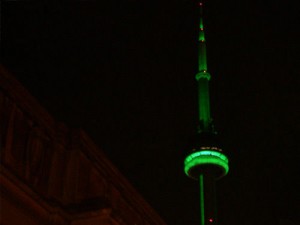 And for fun, test your own knowledge of the environment with this quiz from the Clinton Foundation.

And a few drink recipes  for “green” drinks…just in case you want to celebrate at home with friends!

Fill a tall glass 3/4 of the way with grape juice. Top up with soda water, then garnish with an orange slice, lime slice, pineapple slice, and a cherry. For an alcoholic version, substitute the Club Soda with Sparkling Wine. Can be made as a punch as well! 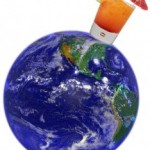 Cheers and Happy Earth Day from the Drink Guy Team!