The World Cup, Everyone is Watching

The World Cup of Soccer, or as we real people like to call it “FOOTBALL,” is once again upon us.

This month long sporting event, played every four years, is easily the most watched, most exciting and biggest sporting event to be displayed on the world stage.

The world cup is an event unlike any other sporting event. Football, or soccer is the most popular sport on the planet. What I mean by this is simple; whereas baseball is America’s pastime, it’s not too popular the world over. 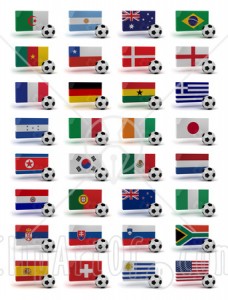 There are other worldwide event’s for any number of sports, but none grabs our attention like ‘The World Cup.’

Qualifying for the football, or soccer tournament is an extensive process. Matches and smaller football tournaments are played in divisions that are broken up and scattered around the globe. Winning is crucial in the four years that lead up to the world cup.

Ranking means nothing, it’s not always the top 32 teams that make the stage. Only the host nation, this year being South Africa, is guaranteed a spot in the world cup.

So who will win is anybodies guess, but here is my predictions for the top two in each division.

So sit back, grab a drink, and enjoy the show. It’s going to be a wild world cup event.