The World Cup is over and Spain sits on top of the world, literally. They have even surpassed Brazil as the number one team on the planet, doing so before the final game even started.

Congratulations go out to the soccer team from Spain, they definitely were the better team in defeating the Netherlands, 1-0 in extra time.  I must say, being one of the pre-tournament favorites and the reigning European Champions, it was surprising to see how slowly they started this World Cup Tournament.

While Germany and the Netherlands came out flying, ranking 1 and 2 in goals scored for the tournament, Spain took a more laid back approach. Becoming the lowest scoring team in World Cup history.

Not being a fan of either Spain, Italy or Portugal, due to their constant diving, I was shocked to see how much the Netherlands decided to dive and even try to injure players with high kicks. Aside from that one incidence in the game when ‘half’ the Spanish team decided to lie down in the penalty box, this team was a thrill to watch.

Puyol’s header against Germany was beautiful, and Iniesta’s shot in extra time against the Netherlands, indescribable, even I stood up and cheered. 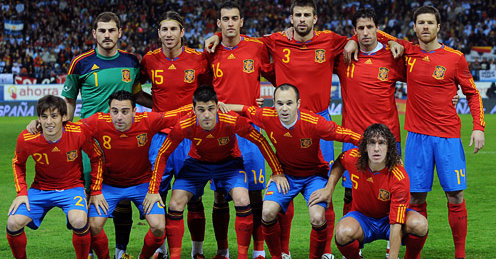 This team has it all, precision in their passing, finesse with the ball and an immovable force in their captain and goalie, Casillas.

So a toast to Spain and the Netherlands, I will savor the flavors of Sangria and wash it down with a Heineken.