Flaming drinks definitely pleases all due to its showmanship.  All alcohol’s burn, usually a bright blue flame, however some better than others.  The higher the percentage or proof the better it lights.  Most cream based liqueurs, not so much so.  So don’t waste your time on them.

This is all about the show, and done right will have anybody eating out of your hands.  Some quick notes, make sure to extinguish the flame before you drink, it will burn all the way down.  Alcohol burns hot so don’t use a cold glass, a sudden change in temperature could crack/ shatter the glass and ruin your effect.  And maybe keep a fire extinguisher close by,  I remember I guy in Vancouver, showing us some flaming drinks, lighting the bar and floor on fire.  Not cool, funny, but scary.

Here are some easy flaming drinks to try.

Mix the two in a snifter, swirl around and light the drink. While lit, pour the flaming drink into a short rocks glass, give a little distance between the two glasses for effect.  Extinguish the flame by covering the rocks glass with the open end of the snifter.  Slam it down. 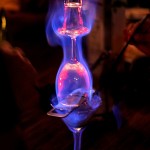 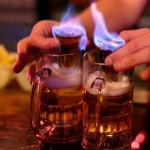 Fill a shot glass about ¾ full with amaretto and top it off with enough 151 proof rum to be able to burn. Fill ½ a pint glass with beer.  Light the shot glass and allow to burn, drop the shot glass in the pint glass and slam it. This flaming drink tastes just like a Dr. Pepper. You can add a splash of coke/pepsi to the beer for proper color.

Shake the Irish Cream, Butterscotch Schnapps and Goldschlager with ice in a cocktail shaker and strain into a cocktail glass. Put a shallow layer of 151-proof rum on top. Light the rum on fire, then immediately sprinkle a generous dash of cinnamon on top. The cinnamon will sparkle and flame.

Don’t let it burn too long, or the Irish cream will curdle!

Have fun with these flaming drinks but be careful.