Hangover Remedies…when the fun is over! 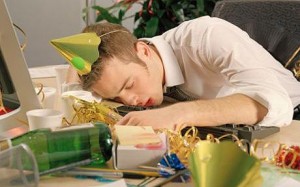 Does it exist? What works, what doesn’t?

Thanks to some of our awesome Drink Guy fans, we have been given some interesting suggestions for curing the result of your Saturday night fun…that Sunday morning hangover.

There are certainly some common themes, and some unusual ones.It seems a favorite way to “cure” a hangover involves food.

From Tammy, Diana, Mark F, Alison, Patti B, and Traci the leading food suggestion involves “greasy spoon” or “junk” food…and specifically from Julie and Chris and Joanne, bacon must be included in the menu!

From Cyn, a teaspoon of honey before bed, from Patty H, a cucumber to replace the nutrients we lost from the beverages we enjoyed, and Mark J let us know that both an apple or blueberries before bed do the trick!

Another favorite theme is…more beverages! :rotfl: These have a broad range, from Tammy, a glass of milk before you drink…many agreed water before bed, and several people suggested an Ibuprofen before bed as well, or vitamins. Or vitamin water!

However, we all know the strong possibility exists that, by the time you are heading to bed, the last thing you are thinking about is how to be proactive about the morning hangover!

So, for the next morning, Patti B, Cheryl, Joanne, and Mark F all agree that chocolate milk, or milkshakes, are the beverage of choice, and Traci finds soda pop does the trick for her. Tammy, Julie and Chris all like a Caesar, and Diana and Patrick agree that a beer in the morning solves their hangover issues…the old “hair of the dog” does work for some hangovers apparently!

A hangover remedy that I liked in particular came from Traci, which is a steaming hot shower until you “wilt”, then switch it to cold…this apparently works just like the bath houses/spas in Europe…I think I’ll travel to Europe and test them though, just to make sure the comparison is accurate. 🙂

Mark and Di agree that sleep, especially in the form of a next day nap, is vital. Natural products like Milk Thistle extract and “Vegas Nites” hangover remedy pills were suggested by Heather and Tracy…and apparently she used the Vegas Nites with much success today, the morning after her 40th birthday fun!

And last, but not least…from Patti, Iain and Sandra…just drink more!

Every hangover is individual, and so it seems are the remedies…we hope one of these remedies works for you! Thanks to all the great fans for your input!!