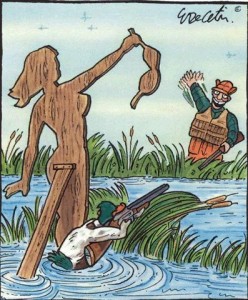 Two guys went out into the woods to do a little duck hunting, and while one kept close watch, the other drank a dozen beers. After considerable time passed, a solitary mallard flew over. The sober guy took aim but missed. “Quick!” he shouted to his drunken buddy. “Try and hit that duck!”

The inebriated guy waved his shotgun in the general direction of the sky, pulled the trigger and damned if he didn’t hit the duck.

“Not really,” said the drunk guy. “When there’s a whole fuckin’ flock, you can’t hardly miss!”

Two executives, Gary and Bill, staggered out of their companies holiday party in New York City. Bill crossed the street, while Gary stumbled into a subway entrance.

When Bill reached the other side he noticed Gary emerging from the subway stairs.

“Where’ve you been?” Bill slurred.

“I don’t know,” replied Gary, “but you should see the train set that guy has in his basement.”

Now This One is Sad and Real, but Funny as Hell

There’s a law on the books in Memphis, Tennessee, whereby a woman is not to drive a car unless a man warns approaching motorists or pedestrians by walking in front of the car that is being driven.

So who gets charged with D.U.I. if the guy has been drinking? Just a thought.