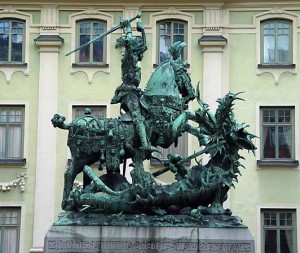 St. George gives us a reason for celebration around the world, and that’s just what we do.  His memorial is celebrated on the 23 of April, and he is regarded as one of the most prominent military saints.

St. George was, according to tradition, a Roman soldier and priest in the Guard of Diocletian (an anti- Christian Roman Emperor), who died a martyr’s death in 303 A.D.

The earliest literacy reference to St. George comes from Eusebius of Caesarea who, in 322 A.D., writes of a noble- born soldier of high rank in the Roman army, being thrown into prison for vehemently disagreeing with Emperor Diocletian’s persecution of Christians and, despite being tortured, refused to recant his beliefs. The following day, April 23, 303, he was dragged through the streets of Nicomedia and beheaded.

Thus, he became rapidly exalted as an example of courage in defense of the poor, the helpless and the Christian faith.

Later, he became associated with the legend of mythical dragon killer, known both in Europe and in Asia. As the legend fitted to symbolize the victory of Christianity over Paganism it got reflected in iconography as well. Hence the image of St. George as a brave warrior, victor and miracle worker.

The legend that was born is infamous. One of St. George fighting the wicked dragon that held the princess captive. Finally St. George kills the dragon and on the spot where the dragons blood was spilled a rose grew as a symbol of love and friendship.

St. George’s feast is ranked higher in England and in certain other regions. It is the second most important National Feast in Catalonia, where the day is known in Catalan as La Diada de Sant Jordi and it is traditional to give a rose and a book to a loved one.

The banner of Saint George… the red cross of  a martyr on a white background… was adopted for the uniform of English soldiers quite possibly during the reign of Richard the Lionheart. Later it also became the official flag of England and the White Ensign of the Royal Navy.

The image of St. George, renowned for his defense of all in need, is among the most well-recognized of Christian martyrdom figures.  Primarily famous for being the Patron Saint of England, George is also known as “Victory Bringer” and “The Quick To Hear.”

St. George is the Patron Saint of Aragon, Catalonia, England, Ethiopia, Georgia, Greece, Lithuania, Palestine, Portugal, Russia and Germany(citation needed). As well as countless other nations, kingdoms and cities of the world.

So let’s raise a beer and cheers to St. George.